Welcome to the century of virtual and augmented reality.

2016 was the beginning of everything for virtual reality, but 2017 is getting insane—for good.

So, these AR and VR innovation below will make the rest of this year no longer the same. And, it’s not only for gaming, but also for traveling, business, food, and more stuff. Let’s take a look.

A research fellow at the National University of Singapore, Nimesha Ranasinghe, is developing a new accessory called Ambiotherm, virtual reality weather add-ons that work with a normal VR headset.

Ambiotherm will be presented at the Conference on Human Factors in Computing Systems in Colorado in May 2017.

There are many people who cannot eat food satisfactorily because of weak jaws, allergies, diet, health problems.

Three years ago, Nimesha Ranasinghe (yes, the same researcher who develops virtual reality weather add-ons) was experimenting something called Digital Lollipop, however, it didn’t really work successfully. So, last year, Nimesha Ranasinghe and his colleagues, Ellen Yu-Luen Do started experimenting again using thermal stimulation to provoke the taste of food. As a user places the tip of their tongue on a square of thermoelectric elements, he/she could taste the sensation of sweetness or spiciness through the changes in temperature. In an initial trial, when the device was warmer (around 35°C), some users could feel a sensation of spiciness. Meanwhile, when the device was cooling down (around 18 °C), some could feel a minty sensation.

However, in an initial trial, it only worked for about half of participants.

This project was presented at the 2016 ACM User Interface Software and Technology Symposium in Tokyo.

The thing about tasting food is not only about the taste, but also the texture. So, thanks to a team from the University of Tokyo, Arinobu Niijima and Takefumi Ogawa, as they introduced a device that uses electricity to simulate the experience of chewing foods of different textures. The good news is that you won’t put this device on your tongue. Instead, you will put it on the masseter muscle—a muscle in the jaw used for chewing—to give sensations of chewiness as you bite down.

Even though this project is still in the experimental stage, the team wishes to help people to satisfy their appetite and enjoy their daily life in the future.

According to the official Twitter of PlayStation, PSVR Aim Controller will launch on May 16, 2017, alongside the sci-fi PSVR FPS, Farpoint.

Better than ever, PSVR Aim Controller will give you more accuracy and with far less of a delay before your motions were reflected in the virtual world. The Aim Controller almost felt like it could read your mind, wrote one of the CNET’s contributors.

The possibility is now limitless like you can even attach the tracker to your fake gun, your racket, and everything. This will completely change the way we experience gaming in VR.

What actually happened if you attach Vive Tracker on the front of Daydream View?

That’s what Master of Shape was experimenting lately: Roomscale VR with Daydream. So, they printed a 3D mount to stuck the tracker on the headset. The result? As mentioned on their blog, the experience is not as strong as the traditional Vive setup, but the team said that the Daydream View with added room scale is pretty awesome. However, the big downside, for now, is that there aren’t any room scale games for Daydream— not to mention Cover Me, a demo the team developed for this experiment.

Don’t lie. Once in your life, you had probably spelled, “Wingardium laviosa,” pretending the object you’re pointing at was moving according to your hand’s movement.

It’s about to get real, anyway. Thanks to Programmer Asad J. Malik, an augmented reality designer.

On his official fan page on Facebook, he posted about this project. It’s a demo on Microsoft HoloLens. To make your spell works, you can simply spell it. Spells can be cast by a user’s voice and the swish of a physical wand as the movement of your hand gestures.

Currently, there are three spells that work on this demo: Wingardium Leviosa to levitate objects; Incendio to set things on fire, and Expecto Patronum to ward off Dementors.

When you have a tight budget that you can only afford a mobile-based virtual reality viewer (like BeThere Book, a cardboard VR viewer, a premium mobile VR headset), you can actually experience full body controller. With VicoVR controller, you can use your hands as wings to virtually fly like a bird; you can use your hands to do boxing, play ping pong and archery like in real life.

VicoVR will track 19 of body joints, connected to your smartphone, and, voila, you can explore the virtual world with your whole body. No specific release date yet, though.

This VR innovation was developed by Visual Experience team, the first virtual reality company in the Gulf Cooperation Council. A virtual reality brochure is basically a foldable brochure, where you can put information about your products information, but, at the same time, you can emotionally connect your client with your products or services through the virtual reality viewer. Unlike any other VR viewer, this viewer is attached along with the foldable brochure. It doesn’t need any assembly, and it works with any kind of smartphone, which is a perfect fit for your clients who’s 99% possibly using a smartphone.

Anyway, this virtual reality brochure is called BeThere Book, and it is now patent-pending.

Just yesterday at the Game Developers Conference (GDC) in San Francisco, Microsoft introduced their first headset from Acer that pair with a Windows Mixed Reality-ready PC.

The headset will begin to ship this month as developer edition.

All this time, we have been watching people experiencing VR, and that’s pretty boring that we can’t see their eyes. Kudos to Google team, it’s pretty much solved now. Using a combination of 3D computer vision, machine learning, and advanced rendering techniques, Google team are able to remove the headset virtually. So, even though a user is wearing a headset (and experiencing VR), you can see their eyes like the GIF above.

There has been a lot of talk about this. A source from Business Insider said 1,000 engineers working on a project related to AR, yet there is no official report from Apple. 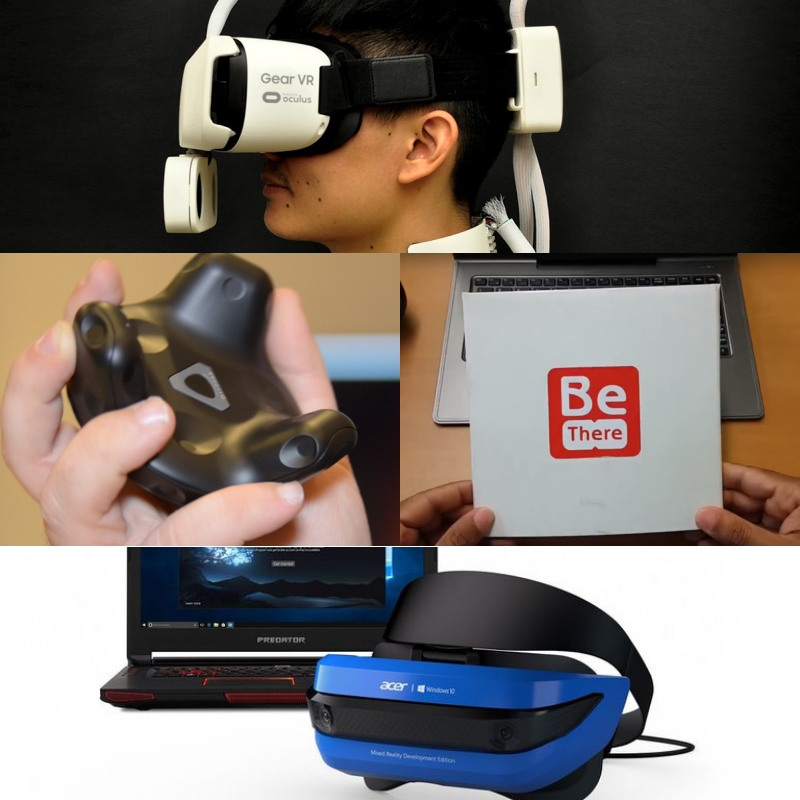 So, from all these AR and VR innovation, which one does make you excited?

Anyway, it’s just the beginning of 2017. We will definitely see more AR and VR innovation in the near future. What kind of VR innovation are you waiting for? Let us know in the comment below.